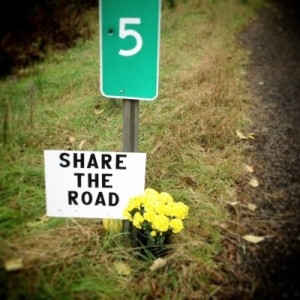 Tillamook County resident and cyclist Meg Thompson placed flowers and a reminder for drivers to be cautious at the site where Kunsman was struck.

At the top of every kid’s list of desired super powers, two reign supreme: flight and invisibility.

As we grow up we abandon our daydreams of super powers. If we’re lucky we find something that makes us feel as though we do have super powers. We skate, ski, or ride. These activities bring a sense of wild freedom and giddy joy. For many of us, it’s as close to flight we can imagine.

Some of us carry that sense of flight and liberation forward into our adult lives when we ride bikes. Some of us only discover this joy decades after our childhood has faded into the past.

Still others of us may ride for purely utilitarian purposes—not really loving it or seeking out recreation by bike—but finding the low-cost, high benefits of commuting suits our wallets and our sense of wanting to tread lightly on the earth.

Whatever our reason for riding, and regardless of how we feel about it, we bike riders have one thing in common: an anti-super power. A terrible vulnerability.

Ask anyone who has ever been struck down by a motorist and it’s the No. 1 reason given for the accident:

It’s what the truck driver said to me seven years ago after speeding up to turn right in front of me, cutting me off and sending me flying into the gutter. Gravel and asphalt shredded my hands and knees. My hip took the brunt of it, and I still suffer from soft tissue and joint damage in my pelvis.

I was concussed and confused as I waited for the ambulance to arrive; the driver stood over my grotesquely twisted, bleeding body and screamed, verbally assaulting me:

“WHAT WERE YOU DOING THERE? WHY WERE YOU THERE, YOU F&%^ING IDIOT?”

Witnesses rushed to my aid, shielding me from the driver’s rage, calming him. I had been traveling in the bike lane, well within my rights, obeying all traffic laws. I’ve been a cyclist for 25 years, and I know how to ride defensively. I’d done nothing wrong…but I was invisible.

When the driver had blown off enough adrenaline he looked down and saw a woman lying on the ground, her arm pinned awkwardly beneath her, legs askew, bleeding, drifting in and out of consciousness.

He began to weep and sputter, apologetically. “I’m sorry. I didn’t see you.”

I had become visible only after I lay still on the street, my head inches from his front wheel. He saw me only after I had been forcibly removed from my bicycle by a Ford F350. 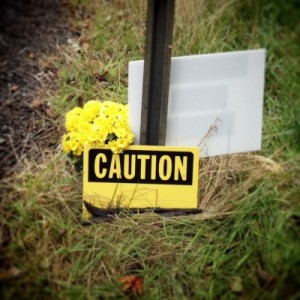 We cyclists have a saying: “There are two kinds of cyclists: Those who have crashed and those who are going to crash.”

Gravity is omnipotent and traction is never guaranteed. If you ride a bike every day, or most days, or just many days, odds are you will crash at some point. Statistically speaking, the more often you engage in any activity, the greater the odds something could go awry.

When that going awry involves a motor vehicle and a bike, the odds get even scarier. How many are as lucky as I have been?

Twice I’ve been struck down by a motorist while riding my bike. Both times I heard the same excuse. “I didn’t see you.”

Read the comments section any time a bike-meets-car story hits the news, and inevitably motorists rage that cyclists deserve their fate for flaunting the rules of the road. Some get downright sociopathic, even going so far as to suggest running down cyclists as sport.

But that’s another story for another time. This story isn’t about that. This is about invisibility. Despite being struck by a moving vehicle while riding my bike—twice—I’m lucky. I’ve walked away with my life and I can tell this story. Not everyone who goes down is so fortunate.

Blinded by The Light 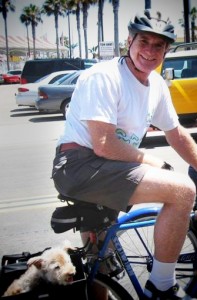 Kerry Kunsman was a passionate cycling advocate and safety instructor.

Kerry Kunsman was not so lucky. The 67-year-old bicycle tourist was en route from Canada to Mexico, riding on Highway 131 in Tillamook County when he was struck from behind by a truck. He died from his injuries in Legacy Emmanuel Hospital three days later.

Ironically, Kunsman was a board member and bicycle instructor for the San Diego County Bicycle Commission. Andy Hanshaw, executive director of the SDCBC, described Kunsman as a dedicated teacher.

“He loved sharing his enthusiasm for cycling” said Hanshaw. “Kerry just wanted to help more people enjoy riding bikes and he was passionate about helping them feel confident and safe. Rider education was a real priority for him.”

As a cyclist, Kunsman practiced what he preached. He rode with reflectors and lights and used a rearview mirror. He wore a helmet, always. He dressed in bright clothing. But despite all his safety precautions, as he rounded a stretch of coastal highway, he was invisible.

Kunsman was a devoted husband of over 40 years. He was a father. He loved teaching, loved riding bikes. And when he was hit, he wasn’t flaunting the rules, a lawless rogue bike rider. He was just a guy riding a bike on a lonely stretch of road, getting as close as he could to that feeling of flight, living his dream, one pedal stroke at a time.

From the start of his Border-to-Border tour, he documented his travels daily on his blog, sharing photos of the sites along the way, his camping setups, the rugged Oregon Coast. The last thing Kerry Kunsman posted on his blog was about a kind interaction he had with a Barview County employee.

She approached him on foot. She addressed him by name. In that moment, before he got back on his bike, Kerry Kunsman was not invisible.

The truck’s driver, 74-year-old Frank Bohannon, didn’t see Kunsman. Bohannon said he was “temporarily blinded” by the glare of the sun as he rounded a curve in the road. He was cited for reckless driving and driving while suspended, as reported by The Oregonian.

The reason for Bohannon’s suspension are still unknown, but the district attorney said no criminal charges were warranted because it was “just an extraordinarily tragic accident.”

Kunsman is the latest in a list of fatal collisions in Oregon involving a bike this year. Seven fatalities have occured in the past five weeks. As reported by Bike Portland, all but one of the accidents in the past month have occured on major highways with narrow shoulders. In nearly every case, the cyclist was on that particular road because it was the only available option for traveling by bike.

Tillamook County resident and cyclist David Thompson knows about invisibility. In 2001 he was hit by an SUV that was pulling out of a driveway in Southwest Portland. An avid bike commuter, Thompson had adopted the practice of making eye contact with every approaching driver. The motorist locked eyes with Thompson, began to slow, then sped up.

He suffered permanent neurological damage from his wounds, but resumed cycling later that year. He felt safe enough to do the Cycle Oregon ride out in the country, but would not ride in the city for years without anxiety.

“Now I’m back on the bike all the time and I love it,” saids Thompson, who lives part time at the coast with his wife, Meg. Both are avid cyclists and ride in the area alone and in groups.

“Nowadays I not only make eye contact with drivers, I also wave to them to make a human connection.” Thompson reports, “I now ride with extremely bright lights, day and night. It really helps to be seen.”

“On these shady, dangerous coastal highways, you need those lights to be visible, especially on Highway 131.”

Thompson said the reports of Kunsman’s injuries and death triggered some PTSD regarding his own accident.

“The weirdest thing is…even though I made eye contact with the driver who hit me, the guy later said he didn’t see me,” he said. “It’s as though he looked right through me.”

When Luck Runs Out

Bicycling critics (who often are indignant, entitled motorists) suggest these accidents point to the need to outlaw bikes.

“Get off the road!” they yell, when you’re in the bike lane. They argue that if cyclists weren’t on the road with motor vehicles, they wouldn’t be injured or killed by them. But the moment a motorist menaces a cyclist, they forfeit the “didn’t see you” excuse.

Cycling advocates argue for more—not less—access. We want safer bikeways, dedicated routes, separated bike lanes and other safety precautions. Portland has pretty phenomenal bike infrastructure compared to other urban areas, but once you get outside the city, things change…and fast.

Rural drivers may be less rageful than their trapped-in-rush-hour-traffic urban counterparts, but the problem of visibility is applicable to cyclists no matter where or when or how they ride.

Accidents happen. But whoever is at fault, whatever the reason for it, when it’s a car-meets-bike accident the cyclist always loses.

Not every recent cyclist death was “just” an accident. One recent death was the result of a driver glancing down at a text message on Highway 30 and swerving; the cyclist—Peter Michael Linden—died on impact.

Negligence is not “just an accident.” Unsafe passing of cyclists is more an act of aggression than an accident.

The world is a crowded place, however we choose to move through it. As Kunsman’s death shows us, even a remote stretch of scenic rural highway can be tight when two humans are trying to occupy the same space at the same time.

Perhaps a new form of advocacy is needed—one that transcends either/or mentalities like “motorist” or “cyclist.” At the end of the day we’re all just a guy or a girl, mother or father, daughter or son, lover, friend…each of us just trying to get through our days with a bit of joy, laughter, some light.

We are all fragile—all mortal—living out our fleshy circumstances, but cyclists are inherently more vulnerable. We are so often viewed as less human by our car-wielding counterparts, and we’re quick to demonize motorists. When accidents happen our outrage and grief define us; we feel justified in our righteous indignation.

Not all accidents are caused by hateful, mean-spirited or inattentive drivers. And not all cyclists are rowdy, scofflaw jerks. A few rotten eggs spoil the rest in every bunch.

But we all started our lives as little kids who dreamed of super powers…of flight, of X-ray vision, of being invisible. We would do well to cultivate new super powers in our adulthood: the powers of empathy, mutual concern, and much, much more awareness.

As an adult, Kerry Kunsman’s super powers are evidenced though his life’s moments: teaching, giving, laughing, and loving. I don’t know what his childhood super power would have been. I don’t need to.

I only wish that he had not been so invisible on that quiet, lovely stretch of road on the Oregon Coast on Sept. 19, 2014.

Kunsman’s family has requested that donations in his memory be directed to the San Diego County Bicycle Coalition to establish a Road Safety Fund in his name. Click to donate.

Üma Kleppinger is a Portland-based copy writer, author and advocate for full-contact anti-bummer living, by bike. She is a recovering sesquipedalian who writes about life in the saddle and outdoor adventure. She is also the author of BikeYoga, a yoga program for cyclists. When not writing, she can be found riding and racing her mountain bike throughout the Pacific Northwest. And she believes that love, laughter and empathy—and pedaling—are the best super powers.